105-Year-Old Woman Surprised with Sexy Firefighters for Her Birthday

Ivena Smailes may have just turned 105, but that hasn’t stopped her from having a lively spirit. The birthday girl told friends that she had one wish for her birthday: for a “burly, tattooed firefighter” to hand deliver her birthday cake. And boy, did she get her wish! [1]

Smailes, who lives in Crawcrook in the northeast of England, was delivered her cake by a fireman from the Tyne and Wear Fire and Rescue Service. He even climbed up to to the third floor of Addison Court Care Home in Wesley Grove where she has resided for the past 3 years.

Those who work at the care home say that Smailes is often the life of the party and has a fantastic sense of humor, as can be aptly demonstrated by her sexy 105th birthday celebration.

“She’s been with us for three years now, and she’s got a fantastic sense of humor, just look at her party today. On her bucket list this year she wanted a cake delivered by a fireman with tattoos. We’ve managed to find one and the fire brigade have been fantastic about it; they were arguing over who was going to climb the ladder and deliver it to her,” stated Debbie Carter, one of the workers at the care home.

Corporate communications officer Michael Chipchase of Tyne and Wear Fire and Rescue Service says that Smailes and his firemen all thoroughly enjoyed her birthday. He relayed to the Huffington Post that she was a little overwhelmed by the surprise and even cried a little bit from the jointly hilarious and kind gesture. [1]

Carter says that Smailes is truly young at heart and no one can quite believe she’s 105 when she tells them. However, as one of the home’s oldest residents, she is lovingly referred to as Aunty Ivy amongst those who are close to her.

After the firemen climbed in and sang happy birthday to Smailes, her family turned up for a buffet lunch, along with a hired singer to croon some of Smailes’ favorite songs and a performance from a local dance studio.

Smailes polished off the day by taking her first selfie. 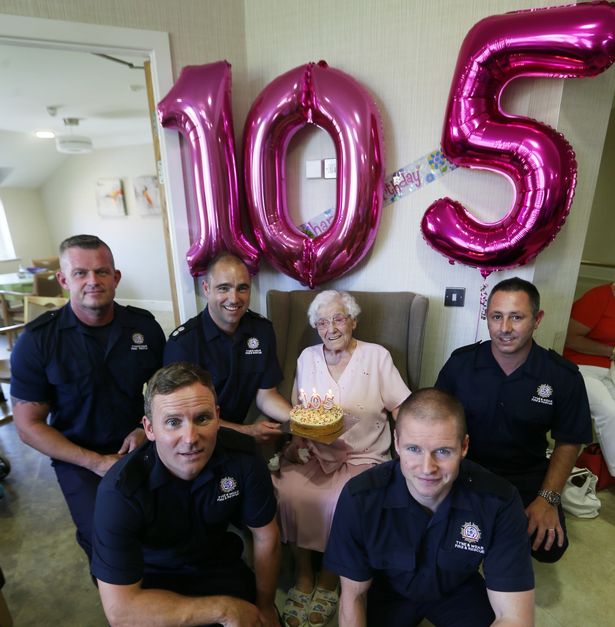