A solution to the California drought?

Southern California’s largest water importer is working towards a plan to purify wastewater into potable drinking water. As nauseating as it sounds, many experts believe it could be an answer to the state’s dwindling water supply.

The Metropolitan Water District of Southern California is discussing the plan with county sanitation districts in the hopes that it could free up more resources to a state with a rapidly-expanding population suffering from a punishing drought. The agency is looking to build what would be the world’s largest plants to recycle sewage into drinking water closer to home. For more than 80 years, it has imported water from hundreds of miles away. [1]

“The agency’s staff presented the framework of a plan to purify and reuse as much as 168,000 acre-feet of water a year – enough to serve about twice that number of households for a year,” the Los Angeles Times reported in late September.

The water district would need to build a treatment plant, delivery facilities, and clear various regulatory hurdles to build the plants, which are expected to cost around $1 billion.

The “toilet to tap” program would transform human waste into drinking water using the same purification process that occurs when water moves through the earth, lakes, and other natural features. The proposed plan could cut the region’s dependence on imported water and purify treated wastewater through a sequence of advanced methods. 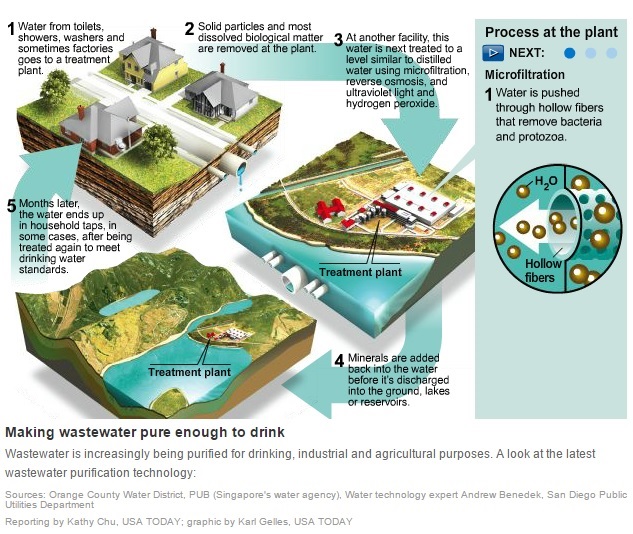 “We’re thinking it would serve Los Angeles County, Orange County and potentially San Bernardino County,” said Debra Man, assistant general manager and COO of the water district, which serves a six-county area and nearly 19 million people. “We’re talking about a regional program and it could afford us some cost efficiencies because of the economies of scale,” Man told CNBC.

Initially, the agency would use the recycled water to recharge underground basins, but there could eventually be a “direct to potable” reuse, according to the district.

In about 20 months, water officials say they will launch a “demonstration project.” The goal would be to perfect 1 million gallons of water per day while officials conduct further research and develop a financing plan. The project would take treated wastewater coming from the Los Angeles County Sanitation District and purify it.

“We are going to be providing (treated wastewater) to them essentially at no cost,” said Robert Ferrante, the sanitation district’s assistant chief engineer. “They are taking a large part of capital and the bigger money side of it.”

“So far, there is only one large-scale recycling plant up and running. The Orange County Water District, which serves 2.4 million people, has recycled 70 million gallons a day since 2008. Its groundwater replenishment system was so well received that the district expanded production capacity this spring to 100 million gallons a day,” the San Francisco Chronicle reported.

Right now, California does not allow “toilet to tap” water, primarily because most people find the concept rather unsettling. But in the coming months, that could change thanks to pending legislation. In December, the California Water Resources Control Board is expected to release a report on whether that’s a viable option. In the meantime, recyclers must mix their product with groundwater. [2]