Vaping May Be Overriding Efforts to Get Kids to Quit Smoking

Great efforts have been made to get people to quit smoking, and to help them avoid starting. The Great American Smokeout, held every third Thursday in November to encourage people to give up tobacco, began in the 1970’s. Medications like Zyban, Wellbutrin, and Chantix were introduced to help would-be quitters fight their cravings. And in the 1990’s, toll-free quit lines were launched in every state. [1]

The government has raised cigarette prices, and young people under the age of 18 (21 in some places) are prohibited from purchasing tobacco products. Due to all of these efforts, the number of smokers has dropped 20% in the last decade.

And all of these efforts had resulted in a major downward trend in teen smoking, but e-cigarette use, or vaping, may be slowing that decline, a new study shows.

“We found evidence that e-cigarettes are recruiting at least some youth who likely would never have smoked combustible cigarettes.”

Many people use vaping to quit smoking, myself included. E-cigarettes and vape pens still contain harmful chemicals, though – but reportedly fewer than traditional cigarettes do.

The e-liquid contained in e-cigarettes can be purchased in varying levels of nicotine, or no nicotine at all. So, smokers who want to use the devices to quit gradually reduce the amount of nicotine they vape until they are able to kick the habit entirely.

In fact, when e-cigarettes first hit the market in 2007, public health experts had high hopes that the devices would lead to declines in tobacco use.

But as you may have noticed, vaping seems to be everywhere. It’s this notion that e-cigarettes are safer that has led to an explosion in their popularity. That, and the hundreds of flavors of e-juice available on the market. Just as many people use them to quit smoking, many people also simply use them as an alternative to smoking. 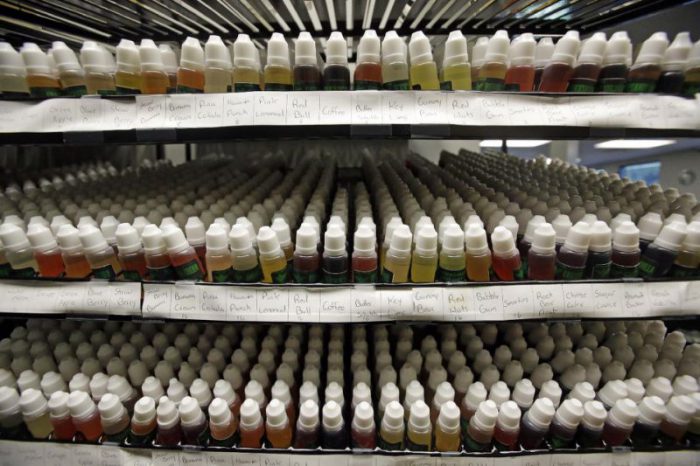 But it Seems E-Cigarettes are Simply Replacing Traditional Cigarettes

Unfortunately, it seems that many young people who might never have tried nicotine are turning to e-cigarettes to experiment, becoming addicted to the drug as a result.

“We estimate that just under 5 percent of teens in our study likely would not have used cigarettes if e-cigarettes were not available.” [3]

For the study, published July 11 in the journal Pediatrics, University of Southern California (USC) researchers tracked the use of cigarettes and e-cigarettes among 5,490 California high school seniors who graduated between 1995 and 2014.

The number of students who reported smoking in the past 30 days has largely plateaued, the study shows.

The number of teens using nicotine, however – either through tobacco cigarettes or e-cigarettes – is increasing.

About 14% of 12th graders in 2014 said they had smoked or vaped in the last 30 days. Researchers say they haven’t seen similar levels of nicotine use among teens since 1995, when 12th-grade smoking rates were 19%.

It seems that e-cigarettes have enticed a whole new group of adolescents to nicotine use. And while the study focused on California teens, the researchers say the numbers are consistent with national trends.

“Kids are not just using e-cigarettes instead of cigarettes. That is what we were frankly hoping to find.”

She explained that all of the teenagers that were expected to be using cigarettes in 2014 are using them, “and then there is a whole group of kids using e-cigarettes on top of that.” [4]

“California certainly has a unique population since we have some of the lowest rates of cigarette smoking in the country.”

She said more research is needed to understand the draw of vaping to teenagers. [3]

The authors wrote in the study:

Dr. Jonathan Winickoff, professor of pediatrics at MassGeneral Hospital for Children and Harvard Medical School, authored an accompanying paper in Pediatrics. He said that this is the first study of e-cigarette use in adolescents to show such a strong longitudinal sample with such a drastic effect.

He told The New York Times:

“We had a trend of decreasing nicotine use. What the e-cigarette has done is halted that decrease in its tracks… We don’t want a fifth of our high school students graduating with nicotine addiction.”

The American Vaping Association (AVA) – a nonprofit advocacy group that champions the use of vapor products and e-cigarettes to help smokers quit – disagrees with the findings of the study.

AVA president Gregory Conley said that many teen e-cigarette users don’t use nicotine in the devices, or don’t use them regularly, making them unlikely to move on to traditional cigarettes.

“There’s no reason for hysteria over data like this.

“While it would be nice to live in a world where teens engaged in no risky behavior, the bottom line is that public health has benefited from the massive declines this country has seen in teen and adult smoking since vapor products have become widely available.” [3]

It’s important to point out that federal statistics have suggested that cigarette smoking levels among teens are hitting lows. Some 11% of teens surveyed in 2015 said they smoked within the last 30 days. That year, 16% said they had used e-cigarettes.