If you vape, then you may have heard that e-cigarettes are safer than tobacco cigarettes. There might be some truth to that, but as a study shows, most e-cigarette users don’t really know what they’re inhaling, even if they take the time to look at the ingredients on the label. [1]

“Flavor chemicals and the solvents, the liquids, that are in electronic cigarettes, they are forming new chemical compounds.”

These chemicals can become irritants that agitate your airways, the study shows.

“The new chemicals we identified in e-cigarettes activate these nerve endings more strongly. Especially when activated over a longer period, as in smokers, and potentially e-cigarette users, these mechanisms have been shown to cause inflammation and asthma and contribute to emphysema.”

Read: Daily E-Cig Users Have Double the Risk of Heart Attack as Non-Users

The team also created and analyzed their own e-juice that included the flavors (aldehydes) and solvents commonly used in the e-cigarette industry.

When the scientists vaporized the liquids they had created, 50%-80% of the acetals were carried over, which means that a significant amount of aldehyde PG acetal reaches the airways when the liquids are vaped. 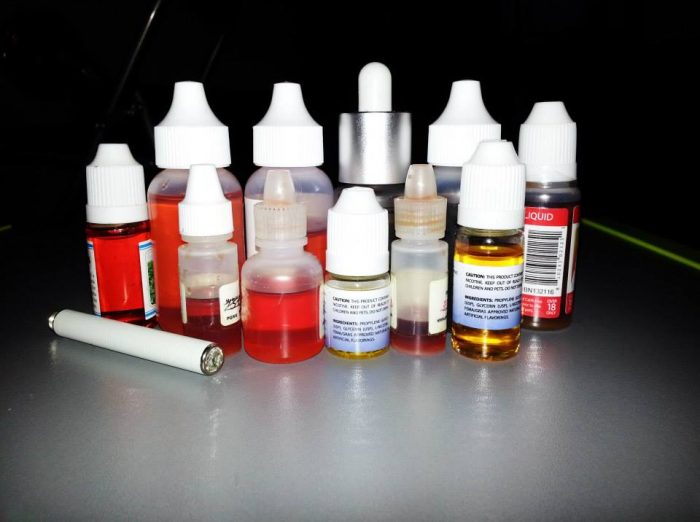 These substances can stick around in the body for quite some time as they are stable in both water and other physiological solutions. It’s not clear what long-term effects they might have on health, according to Jordt.

And since these compounds are only created when they’re mixed together, they are not listed on e-liquid ingredient labels. E-cigarette users think they know what they’re being exposed to because e-cigarette companies claim to use well-known chemicals, nicotine, and solvents, and that they remain stable when they are mixed together. The study shows that is not the case.

Read: Even Without Nicotine, E-Cigarette Flavorings may Damage Blood Vessels

Ilona Jaspers, professor in pediatrics, microbiology, immunology, and environmental science and engineering at the University of North Carolina at Chapel Hill, said that many scientists suspected that the e-cigarette manufacturers’ claims were not true.

“These are very reactive chemicals, and it would be naive to think that they would stay in isolation and not react and cause secondary and tertiary products once they are put in the mixture.

One of the big items to take away from this here is that we have to look at this e-liquids as a dynamic mixture potentially, a chemical mixture that is not necessarily stagnant and may change over time.”

Jordt pointed out that if the chemicals created by mixing e-liquids were severely irritating, you would see people giving up vaping en masse. The real concern is that chronic, low-level stimulation of the airways’ irritation receptors could lead to some sort of more serious lung damage in e-cigarette users.

“If they are more continuously activated they can lead to inflammation, chronic cough, they also promote asthma. That’s why we are concerned.”

The study is published in the journal Nicotine & Tobacco Research.