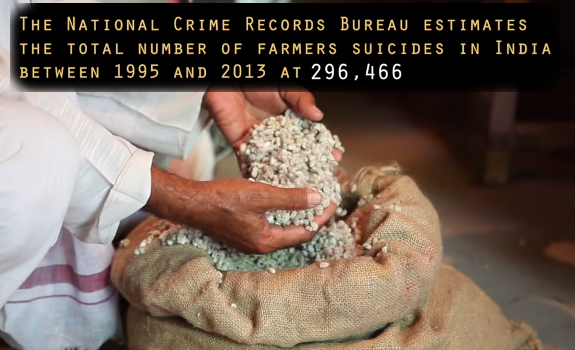 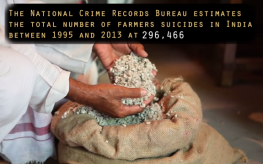 Biotech has tried to dismiss the accounts of farmer suicides in India due to the introduction of genetically modified crops, but the problem is pervasive. Once the farmer is gone, the debt falls on the remaining family members. Monsanto, Dow, Bayer, and other suicide seed sellers have essentially created a generational slave economy based on their toxic chemical and seed monopolies.

While there are other contributing factors to farmer suicides in India, debt is the largest concern, and non-viable crops are part of what creates that debt. Biotech sells seeds that don’t grow or that create superbugs, urging farmers to purchase RoundUp and other herbicidal chemicals which the farmers can ill afford. Thus, the mind-numbing cycle begins.

Now, you can hear straight from the farmers themselves about this ongoing problem in India surrounding GM crops.

Commissioned by the 2014 Food Safety and Sustainable Agriculture Forum, YIELD offers heart-breaking testimonies from cotton farmers in Vidarbha, Maharashtra that tell the true story. These people are nothing less than victims of corporate imperialism.

One voice of dissent, Vijay Jawandhia, from a farmers union, comments:

“I believe that the loot of the land for monetary gain has been going on since the advent of industrialized agriculture. Ever since we were colonized by the British, they have systematically exploited the cotton farmer.”

Though the story of exploitation in India is an old one, there were no farmer suicides when foreigners were exploiting cheap Indian labor for cotton textiles during British rule. In come the banks and biotech. Between 1995 and 2013 there have been 296,466 farmer suicides, according to India’s Crime Records Bureau of Statistics.

Farmers who had worked their fields for multiple generations were used to having respectable yields some years and less-than stellar yields in others depending on weather, but the devastation to modern family farms in India from utilizing GM technologies is unsurpassed.

Some farmers dug wells or learned to use other sustainable farming practices to increase yields over rain-poor years. Some farmers had to pay banks for loans in order to dig deep enough to find water. This also contributed to farmer debt, as the interest rates on the loans made it difficult for farmers to pay them back. Banks used this financial vulnerability of farmers to seize their land.

Families who had large plots or many acres would then be sold back only a few acres, limiting their ability to grow enough food for themselves, or to sell at market. This led to a dependence on biotech by farmers, looking for some ‘magic bullet’ to grow crops on their small plots of land.

The documentary, Bitter Seeds, details how Monsanto and other biotech companies then swooped into India, promising farmers higher yields if only they planted GM seed and used RoundUp chemicals.

“. . . the motivations for these suicides follow a familiar pattern: Farmers become trapped in a cycle of debt trying to make a living growing Monsanto’s genetically engineered Bt cotton. They always live close to the edge, but one season’s ruined crop can dash hopes of ever paying back their loans, much less enabling their families to get ahead. Manjusha’s father, like many other suicide victims, killed himself by drinking the pesticide he spreads on his crops.”

Even worse, money lenders (instead of banks) now familiar with the unworkable business of planting a GM cotton field and unwilling to loan to farmers, charge exorbitant interest rates to families who need to purchase seed, pesticides, and industrial fertilizers. The age-old practice of farming organically and sustainably is turned on its head since the farmers are doomed before they even get started.

While biotech has promised to ‘feed the world,’ they have done nothing more than create a biosphere of noxious chemicals, ruined indigenous seeds, and devastated farming communities.