A powerful report spanning 10 years from the Centers for Disease Control and Prevention has revealed that painkillers are actually responsible for a whopping four times as many deaths as both heroin and cocaine combined. 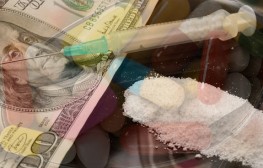 The admission coincides with the initial report I told you about back in 2011, in which it was exposed that painkillers were killing around 15,000 per year back in 2008 (still more than cocaine and heroin combined). But now, we’re not just looking at a single year of data. Instead, we’re looking through an entire decade of statistics that paint a picture of just how deadly our ‘legal’ drug industry is — and it turns out it’s even more deadly than the illegal drug trade.

While the previous report documented in 2011 found that 12 million were actually on prescription painkillers purely for the high it gives, the new CDC papers found that there was a massive 415% rise in the overall rate of fatal painkiller overdoses from 1999 to 2010. We’re talking about a higher fatality rate than those who are dosing up on heroin and cocaine. Specifically, the rate of painkiller fatality deaths is about four times higher overall than cocaine and heroin combined.

“The death rate from prescription painkiller overdose—specifically opioid painkillers such as hydrocodone and oxycodone—rose 415 percent among women and 265 percent among men from 1999 to 2010, according to a CDC study released Tuesday. Officials with the CDC say there’s been a five-fold increase in prescriptions for powerful painkilling medications, but no similar increase in the incidence of painful conditions that warrant them.”

What this means is that, as drugs are more accepted into society as a way of life (or a way to get high legally), we see an abundance of painkillers with virtually no increase in real reasons to use them. Amazingly, the drug companies and the FDA are entirely aware of this fact, so why are they still dosing up 12 million patients with painkillers who purely want to get high? Sure, it can be challenging to identify which individual patients need or do not need the drugs, but it’s not hard to figure that something might be wrong with dishing out millions of extra painkillers each year with absolutely no spike in real conditions.

The drug industry is out of control as usual, and the socially accepted ‘legal’ drugs are once again even more dangerous than the illegal alternative. And as it turns out, we have an entire base of legal drug users that are dying more often than even users of heroin and cocaine.