World’s Largest Bee, Thought to be Extinct, Spotted in Indonesia

Animals and insects the world over are facing extinction due to loss of habitat, disease, and a variety of other reasons. So, when researchers discover that an insect they believed to be extinct is in fact still on the planet, it’s reason to rejoice. Enter Wallace’s giant bee.

In January, an international team of researchers spotted the Megachile pluto, otherwise known as “Wallace’s giant bee,” in Indonesia’s North Moluccas island group. The bee, named after British naturalist Alfred Russel Wallace, hadn’t been seen in the wild since 1981 and was assumed to be extinct.

Simon Robson, honorary professor of the University of Sydney’s School of Life and Environmental Sciences, said:

“Amid such a well-documented global decline in insect diversity, it’s wonderful to discovery that this iconic species is still hanging on.”

Wallace’s giant bee has a wingspan of more than 2.5 inches and is considered the largest bee on the planet. It’s about the size of a thumb and its buzz is more of an impressive growl. Female bees make their nests in termite nests, and the researchers found a single female giant bee in a termite nest in a tree about 8 feet off the ground, according to the university. [1] [2]

The team documented the bee and released it back into the wild. [1]

“The structure was just too perfect and similar to what we expected to find. I climbed up next, and my headlamp glinted on the most remarkable thing I’d ever laid my eyes on. I simply couldn’t believe it:

We had discovered Wallace’s giant bee.” 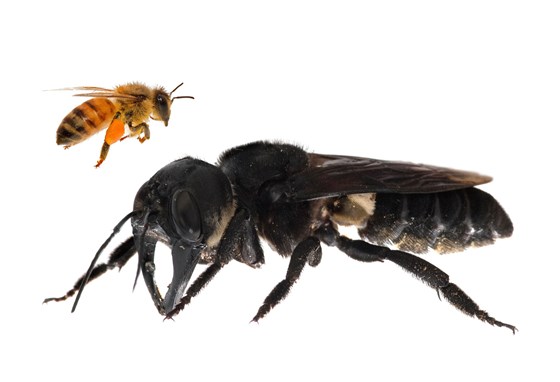 The giant bee was first discovered by Wallace during an expedition to the islands in 1858. At the time, Wallace, who independently conceived the theory of evolution alongside Charles Darwin, described it as a “large, black, wasp-like insect, with immense jaws like a stag-beetle.” After that, Western scientists didn’t spot the enormous insect again until 1981. After that, no one had any encounters with the bee until earlier this year.

“We were just basically freaking out after so many years of planning [the expedition] and almost giving up hope. It was an incredible moment to realize that we came all this way, other people have looked for it, and here we were: filthy and sweaty and we somehow found this insect. For me, it was a moment of tremendous gratitude and humility that I was a part of this moment and this team.”

Wallace’s giant bee is a rather unnerving sight to behold, but there is little to fear. Their “immense jaw” is not used to bite, but to carry globs of resin back to the nest. Since the bees lead solitary lives, they are devoid of the defensive nature that other bees are known for, and lack the stinging tendencies of hive-dwelling bees.

Now, researchers want to learn more about the bee so they can determine how to best protect it and its habitat. Bolt said his team will work with Indonesian researchers and conservation groups to set up protection for Wallace’s giant bee.

“This really offered me hope. There’s so much bad news that’s coming out, with all these species being lost, and I think sometimes it’s easy to just easy to give up and say ‘there’s no hope for anything.’ Wallace’s giant bee shows that, with time and effort, even long lost species can be found again.”