These Toxic Chemicals Found to ‘Wreck Your Hormones’

A new study is attempting to measure the effects of toxic endocrine disrupting chemicals and understand their long term impact in the realms of finance, the environment, and personal health. What the researchers found was startling to say the least.

The study, published in the Journal of Clinical Endocrinology and Metabolism, looked at the effects of endocrine disrupting chemicals in European countries and how the following health risks would translate into economic costs for those who become sick or disabled as a result.

“Global experts in this field concluded that infertility and male reproductive dysfunctions, birth defects, obesity, diabetes, cardiovascular disease, and neurobehavioral and learning disorders were among the conditions than can be attributed in part to exposure to endocrine-disrupting chemicals (EDCs). The €157 billion estimate is conservative, and represents 1.23 percent of Europe’s gross domestic product (GDP). These costs may actually be as high as €270 billion ($359 billion), or 2% of GDP,” the study states.

Endocrine disruptors exist in a broad variety of products in today’s society. Most receipts, food packaging, plastic bottles, some money, lining inside of cans, and even toilet paper contain one or more of these types of chemicals that have adverse effects on the body and its ability to produce and regulate hormones. When a frozen package is thrown into a microwave or hot water, this also greatly increases the potency of these chemicals. The most dangerous of these, however, probably comes in the form of pesticides that are sprayed onto crops and eventually end up in the food and water supply.

When examining the health concerns associated with endocrine disruptors, researchers noted the link between prenatal exposure to these chemicals and the onset of developmental disorders in the mother’s children, and how those would result in further economic costs on a large scale. Endocrine disrupting chemicals can imbalance the hormones in a pregnant mother and may also be responsible for infertility and other pregnancy complications. 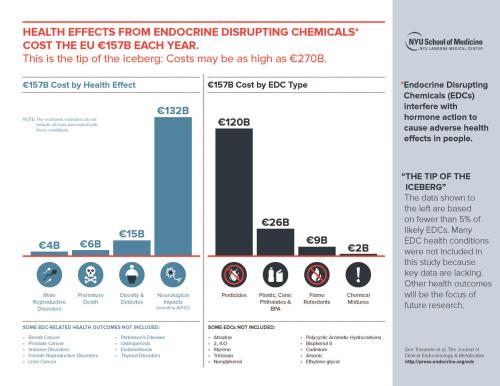 These exposures have been associated with everything from mental disorders, to infertility, to obesity. Because of the negative effects on the general well-being of individuals, researchers estimated that up to $170 billion is being spent managing the immediate and long term effects that these chemicals have on personal health. Though the study was limited to European countries, the implication is equal if not greater in other countries including the United States.

It’s important to deal with the root cause of a problem instead of accepting that the effects of this toxic contamination are somehow an inevitable conclusion. This would save not only money, but a lot of hardship in the area of personal health.

“The analysis demonstrates just how staggering the cost of widespread endocrine-disrupting chemical exposure is to society,” said Leonardo Trasande, MD, MPP, Associate Professor of Pediatrics, Environmental Medicine & Population Health at NYU Langone Medical Center, who led a team of eighteen researchers across eight countries in this landmark initiative. “This research crystalizes more than three decades of lab and population-based studies of endocrine-disrupting chemicals in the EU.”

10 responses to “These Toxic Chemicals Found to ‘Wreck Your Hormones’”