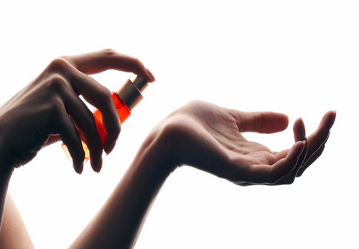 A gaping loophole in a 37-year-old federal law allows makers of perfumes, colognes and body sprays to conceal the chemicals that comprise the fragrances — and some of those unidentified odor creators may be harmful to public health, two advocacy groups say.

In preparing their 43-page study, the Campaign for Safe Cosmetics and the Environmental Working Group commissioned laboratory analysis of 17 big-selling fragrance products. Those tests showed the products together contained 38 secret chemicals.

The findings were released under the heading “Not So Sexy: The Health Risk of Secret Chemicals in Fragrances,” accompanied by a cover photograph showing an attractive couple apparently reacting to the effect of a seductive scent.

Leading the list with the most unidentified ingredients is American Eagle Seventy Seven with 24. Chanel Coco has 18, and Britney Spears Curious and Giorgio Armani Acqua Di Gio have 17, according to the report. 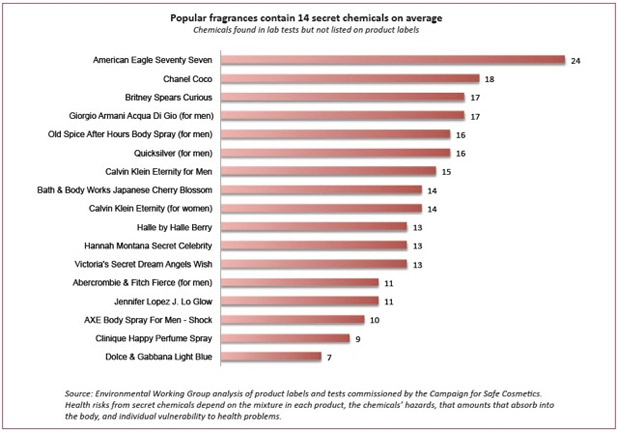 As the researchers worked through the selected fragrances, the pattern continued. “Every product we tested contains a mixture of secret chemical compounds not listed on the labels,” Jane Houlihan, senior vice president for research for EWG, told AOL News.

Those unlisted compounds, she continued, “included 10 sensitizing chemicals that can trigger allergic reactions, four hormone disrupters in each product and a dozen chemicals not tested for safety by government or the fragrance industry itself.”

Failing to name the chemicals in a fragrance is legal under the Federal Fair Packaging and Labeling Act of 1973. Though that law requires companies to list cosmetics ingredients on product labels, it explicitly exempts requiring breaking out the specific components of a perfume or cologne. Instead, when a consumer reads the ingredients of those products, she finds only the generic category of “fragrances.”

“By taking advantage of this loophole, the cosmetics industry has kept the public in the dark about the ingredients in fragrances, even those that present potential health risks,” Houlihan says.

The federal government appears equally uninformed. Along with the strictures established by the 1973 law, the U.S. Food and Drug Administration lacks the authority, and apparently the desire, to require manufacturers to test cosmetics, including fragranced products, for safety before they are sold to consumers.

In a February interview, senior FDA officials told AOL News that Congress has prevented the agency from regulating cosmetics.

The last line of defense for public health would be the industry’s own trade research groups — the International Fragrance Association or the Research Institute for Fragrance Materials. But the “Not So Sexy” researchers say few of the unlisted compounds they found have been evaluated by the safety review panels of the two organizations.

On average, the products the researchers tested contained 14 secret chemicals not listed on the label. The clandestine compounds include some with troubling hazardous properties or a propensity to accumulate in human tissues. The researchers say these include diethyl phthalate, a chemical found in 97 percent of Americans and linked to sperm damage in human epidemiological studies; musk ketone, a synthetic fragrance ingredient that concentrates in human fat tissue and breast milk; and food additives whose safety in perfumes has not been assessed.

Under U.S. law, the term “fragrance” is defined as a combination of chemicals that gives each perfume or cologne its distinct scent. Fragrance ingredients may be produced by chemical synthesis or derived from petroleum or natural raw materials.

According to EWG analysis, the fragrance industry has published safety assessments for only 34 percent of the unlabeled ingredients.

Some of the chemicals that are disclosed on the labels of the products in this report also raise safety concerns, the researchers concluded. They include ultraviolet-protector chemicals associated with hormone disruption and two dozen chemical sensitizers that can trigger allergic reactions that can in turn cause headaches, wheezing, infant diarrhea and vomiting, reduced pulmonary function, asthma and airway irritation, and contact dermatitis.

When a perfume is sprayed or applied to the body, the chemicals it contains can be inhaled and absorbed through the skin. “As a result, the bodies of most Americans are polluted with multiple cosmetics ingredients. This pollution begins in the womb and continues through life,” the researchers say.

The report also cautions that the potential hazards from unidentified fragrances extend beyond products explicitly purchased to smell better.

Along with listing those that fail to identify all their ingredients, the study also the names roughly 200 brands that tell consumers everything that’s in their products.

UPDATE: On Wednesday, the Fragrance Materials Association issued a statement saying “There is nothing ‘secret’ about the ingredients being used in fragrances” and that a list of the chemical information on the ingredients that any consumer, or special interest group wants can be found at www.ifraorg.org.

“Scare mongering through the use of ‘suggested’ or ‘potential’ associations between fragrance materials and various toxicities is deplorable, particularly when present in a document that purports to be scientific,’ said Cathy Cook, the association’s spokesperson. Her statement further faulted the study because it was “self-published and not peer-reviewed.”