Report: GMO Activists and Independent Scientists Targeted by US Military 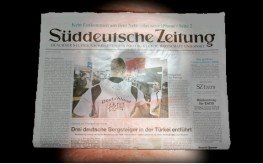 A new report reveals that not only are GMO activists being targeted by various news media hit pieces, but that those seeking to regain the food supply are also the targets of the US military and the US government at large.

Stemming from a German newspaper known as Süddeutsche Zeitung, the July 13th edition of the paper unleashed the bombshell news from overseas — perhaps not fearing the repercussions of discussing the information within German borders. And while it may not be news to readers across the pond who are already a bit more aware of the US’s situation than even American citizens themselves, the report has been translated and is being shared around the web.

One alternative news website, Sustainable Pulse, actually went ahead and archived the paper and the subsequent report on the subject. Going under the report headline “The Sinister Monsanto Group: ‘Agent Orange’ to Genetically Modified Corn,” the paper report goes on to detail the mounting ‘cyber war’ that is currently being launched on activists from all sides of the spectrum — with a major focus on those who dare to protest Monsanto and GMOs. And with the incredible success of movements like the March Against Monsanto and the upcoming Monsanto Video Revolt, that means millions are being targeted in this ‘cyber war’.

Perhaps I am a prime suspect for my extensive work in raising the alarm over Monsanto, GMOs, and the downright political corruption that has led to taxpayers actually paying for Monsanto’s marketing strategy internationally. We’re talking CDs and marketing pamphlets paid for with your taxpayer dollars. But this behavior coincides with announcements we’ve seen in the past that complaining about your tap water will get you flagged as a terrorist.

Here’s some quotes from the report:

“Monsanto contacts are known to the notorious former secret service agent Joseph Cofer Black, who helped formulate the law of the jungle in the fight against terrorists and other enemies. He is a specialist on dirty work, a total hardliner. He worked for the CIA for almost three decades, among other things as the head of anti-terroism. He later became vice president of the private security company Blackwater, which sent tens of thousands of soldiers to Iraq and Afghanistan under US government orders.”

The writers then go on to discuss Monsanto’s control of the US government, specifically the WikiLeaks report I’ve covered extensively that revealed top US politicians were threatening ‘military style trade wars’ against nations that refused to adopt Monsanto’s GMOs:

“For example, in 2007, the former US ambassador in Paris, Craig Stapleton, suggested the US government should create a penalties list for EU states which wanted to forbid the cultivation of genetically engineered plants from American companies. The wording of the secret dispatch: “Country team Paris recommends that we calibrate a target retaliation list that causes some pain across the EU.” Pain, retaliation: not exactly the language of diplomacy.

And how the US plans to use trade agreements to push Monsanto further:

“The Americans want to use the Free Trade Agreement to open the European GMO Market. The negotiations will be detailed. Toughness will rule the day. US President Barack Obama has therefore appointed Islam Siddiqui as chief negotiator for agriculture. He has worked for many years for the US ministry of agriculture as an expert. However, hardly anyone in Europe knows: From 2001 to 2008, he represented CropLife America as a registered lobbyist. CropLife America is an important industry association in the United States, representing the interests of pesticide and gene technology manufacturers – including of course Monsanto.”

The fact of the matter is that if you’re a GMO activist who has followed the news regarding the corrupt biotech juggernaut that is Monsanto for any period of time, this report may not surprise you. The general public, however, is still not fully aware of how deep Monsanto’s roots truly go when it comes to political control.

9 responses to “Report: GMO Activists and Independent Scientists Targeted by US Military”