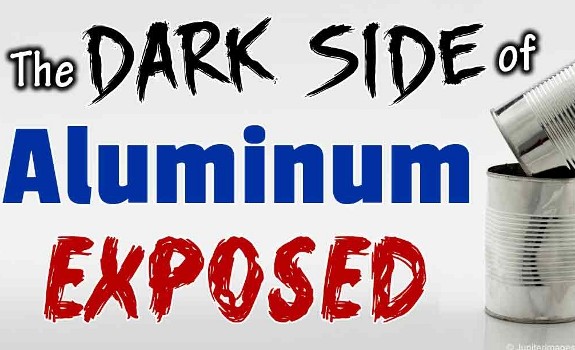 Studies have been around for over a decade linking breast cancer to aluminum poisoning. Women unknowingly using antiperspirants filled with aluminum were found to have genotoxic cancer profiles. In short, the breasts of women suffering from cancer were full of the the stuff. Aluminum is also known to interfere with estrogen balance in the body as well as cause DNA changes. While there are ample scientific journals espousing the toxicity of aluminum from antiperspirants, why are they not talking about aluminum in several other things we are exposed to daily?

Why You Need to Worry About Aluminum

Just one of these journals says “The evidence warrants serious consideration of reducing human exposure to aluminum.” Aluminum toxicity has also been linked to Alzheimer’s disease, even though the nail in the coffin – a double-blind test showing a direct link – has yet to be published, there is still an admittance that:

“. . .a detailed mechanism of the role of aluminium in oxidative stress and cell death is highlighted. The importance of complex speciation chemistry of aluminium in relation to biology has been emphasized. The debatable role of aluminium in AD and the cross-talk between aluminium and genetic susceptibility are also discussed. Finally, it is concluded based on extensive literature that the neurotoxic effects of aluminium are beyond any doubt, and aluminium as a factor in AD cannot be discarded.”

We already know that aluminum causes numerous detrimental affects to the human nervous system as well. It has been linked to Gulf War illness, as well as profound motor skill depletion in developing children – so why on earth are we still using this in vaccines?  And if they are really spraying aluminum on our heads every day in chemtrails (along with other toxic chemicals) you have to wonder how any of us could trust the government and medical paradigm whatsoever.

Aluminum oxide (along with Barium oxide and other toxins) is found in chemtrails, too. While it is true that aluminum is naturally present in forest soils, it is locked up in aluminum silicates, not sprayed, injected, and rolled onto the body as aluminum salts and adjuvants are in our modern society. It is a chemical known to cause damaged brain functioning, even though it has been used to propel rockets. It also kills our plants:

“The metal kills all roots first, this means that trees can no longer absorb and transport needed nutrients, such as phosphates, calcium, and magnesium-essential fertilizers that are themselves leached away from the soil by acid deposition, The trees are weakened and can be invaded by insects or pathogens or secumb to extremes of weather-or all of the above, in which case they die.”

Francis Mangels describes how this particular form of aluminum is killing our trees in this video.

Aluminum is also present in many children’s vaccines as a means to ‘boost the immune system.’ It is possible that aluminum is even more toxic than thimerosol, which contains mercury and is added to vaccines as a preservative. According to a study published in Current Medical Chemistry, children up to 6 months of age receive 14.7 to 49 times more aluminum from vaccines than the U.S. Food and Drug Administration (FDA) safety limits allow. Aluminum has now replaced mercury in many vaccines including Hepatitis and HPV vaccines.

Why Exactly is Aluminum Added to Vaccines?

It comes down to the money. Aluminum is added to vaccines in order to boost the body’s reaction to the antigen (the virus or bacteria that causes your body to make antibodies, your natural immune response to foreign invaders). If your body’s antigens are increased, then less antigen has to be used by the manufacturers of vaccines, which makes them less expensive.

Silica does not seem to have harmful health effects; there are even studies that have shown it actually helps to alleviate the symptoms of dementia, as reported in the American Journal of Clinical Nutrition. Even though silica does not seem to be harmful to humans, it can be damaging in industrial water uses, and is often removed from municipal water supplies.

Known as a living fossil, horestail herb (Equisetum arvense) is used for detoxing aluminum, alleviating osteoperosis symptoms, and promoting healthy skin. It nourishes the bones and can prevent bladder weakness as well. Just make sure you take a Vitamin B1 (thiamine) supplement or get it naturally if you take this herb since it contains an enzyme that may deplete it. Also, make sure you use natural supplements, not GMO aflatoxin B1, since it is even more toxic than aluminum and one of the worst carcinogens on the planet! Even dermal exposure can be toxic.

Whatever method you choose, detoxing from aluminum could very well save your life, but will most certainly improve your health.