Maine Voters Approved Recreational Pot, but the Governor is Fighting

It’s official: recreational marijuana is legal in Maine, it was confirmed December 21, following a recount request by an anti-pot group. [1]

The recount was requested by the state’s “No on One” campaign, named after the ballot measure, Question 1. Ballots from 42 municipalities within the state were recounted, representing approximately 30% of the total votes.

Voters passed the measure November 8 with a margin of 4,073 votes in favor of legalizing the recreational use of marijuana. The recount confirmed the vote, though by a smaller margin: 3,995 votes.

The outcome means that adults 21 and older will be able to legally grow, possess, and use marijuana for recreational purposes, likely within weeks.

Maine Secretary of State Matthew Dunlap has certified the vote and passed it along to Gov. Paul LePage for his signature.

The way these things usually work is the governor signs the proclamation to make it official, but LePage says he is seeking legal advice concerning whether doing so would violate his oath to uphold the Constitution. [2]

LePage originally said his beef is that marijuana is still illegal at the federal level, so he’s concerned about signing a Maine law which is contrary to federal law.

Then, on Dec. 22, LePage changed his tune when he told a local radio station that his main concern was illegal voting, and said that he would ask Dunlap to investigate and make sure there was no shady voting going on.

Dunlap wasn’t happy with LePage’s allegation, and said that Maine’s elections have been shown to be clean. New voters provided the appropriate identification, everyone all the requirements, and voter fraud was non-existent.

Dunlap says it doesn’t matter, though – it’s going to happen with or without LePage’s John Hancock (signature).

Besides, according to University of Maine Law School Emeritus Professor Orlando Delogu, when it comes to the Constitution, LePage doesn’t know what he’s talking about. Delogu said:

That There is the Devil’s Lettuce 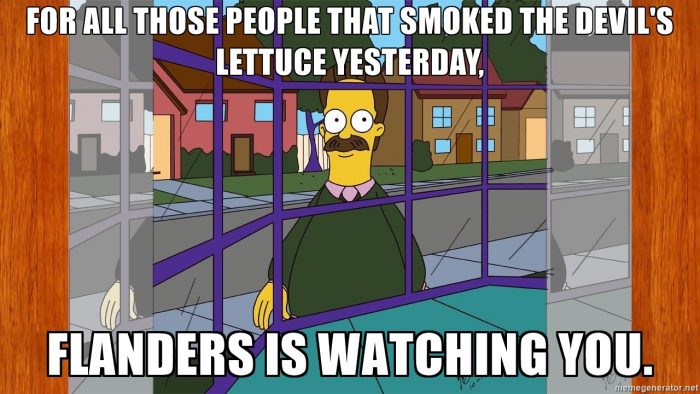 Here’s a few doozies from LaPage on marijuana:

Paul LaPage is a man with very set, very incorrect views on marijuana. It seems that his concerns about voter fraud and the Constitution are just veiled attempts to get his way.