He can't believe that pot can help reduce the opioid epidemic

You might have read that Jeff Sessions said during an appearance in Richmond, Virginia, on March 16 that marijuana is “only slightly less awful” than heroin. Well, he didn’t say that exactly, but that’s what he meant. [1]

“I realize this may be an unfashionable belief in a time of growing tolerance of drug use. But too many lives are at stake to worry about being fashionable. I reject the idea that America will be a better place if marijuana is sold in every corner store. And I am astonished to hear people suggest that we can solve our heroin crisis by legalizing marijuana — so people can trade one life-wrecking dependency for another that’s only slightly less awful. Our nation needs to say clearly once again that using drugs will destroy your life.” [1]

Sessions has never made it a secret that he thinks marijuana is loathsome.

Read: In States that Legalize Marijuana, Opioid Use Decreases

Says Dr. Donald Abrams, a professor of clinical medicine at the University of California San Francisco, who has studied the health effects of marijuana:

“The statement flies in the face of the science. No one has died from an overdose of cannabis. There’s abundant evidence that it is a useful intervention for chronic pain, and we may see it’s useful in harm reduction.” [1]

It’s true – no one has ever died from a marijuana overdose. If they have, it hasn’t been documented. Even the DEA says it doesn’t happen. Does that mean there have never been any marijuana-associated deaths? No. Some people have done some tragic and ridiculous things after using cannabis, but these cases are extremely rare, and there is no word on whether these individuals had underlying physical or mental health issues that would have caused such a horrible reaction. But let’s be clear: no one has ever overdosed on pot.

On the other hand, more than half-a-million died from drug overdoses – hardcore drugs – between 2000 to 2015, and an estimated 91 people die every day from an opioid overdose.

In January 2017, the National Academies of Sciences, Engineering, and Medicine released a committee review of all research on the health impacts of cannabis since 1999. It found that marijuana is a proven pain-reliever and may be a legitimate alternative to opioids. [1] 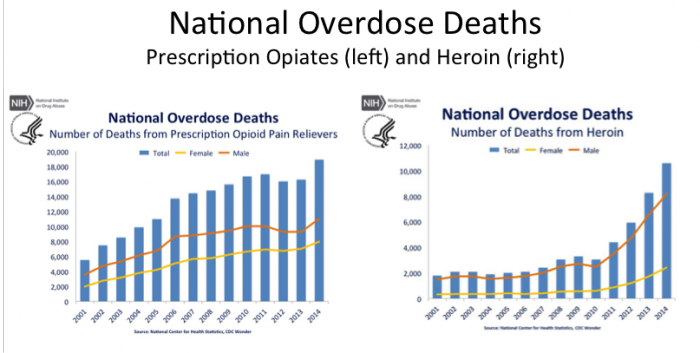 So, let’s talk about why people aren’t overdosing on marijuana. Although Jeff Sessions isn’t into science, that doesn’t mean everyone else can’t be.

When someone ingests marijuana, the plant’s chemicals latch onto molecules in the brain known as cannabinoid receptors. You get high when you use pot because cannabinoid receptors influence pleasure, memory, coordination, cognition, and many other things. But cannabinoid receptors are not found in brainstem areas that controls breathing, so “lethal overdoses from cannabis and cannabinoids do not occur,” according to the National Cancer Institute. [2]

Marijuana is also not a gateway to harder drugs.

Sessions went on to say:

“In the ’80s and ’90s, we saw how campaigns stressing prevention brought down drug use and addiction. We can do this again. Educating people and telling them the terrible truth about drugs and addiction will result in better choices. We can reduce the use of drugs, save lives and turn back the surge in crime that inevitably follows in the wake of increased drug abuse.” [3]

Marijuana use, like any other activity, can become habit-forming, and heavy users who suddenly stop using weed can experience some unpleasant symptoms. Additionally, long-term, heavy pot users can experience something called “cannabinoid hyperemesis syndrome,” in which people become nauseous and vomit. The syndrome is relieved by hot showers or baths. It takes more than a dozen years of smoking several times a day for someone to develop cannabinoid hyperemesis syndrome. [4]

Sometimes people do dumb things while under the influence of weed. Some people simply do too much of it than they can personally handle. But Jeff Sessions is dead wrong in his assessment that marijuana is only slightly less dangerous than heroin.

The frightening thing is, he may use the information to crack down on legal marijuana, which would be a shame for everyone who uses it as medication.