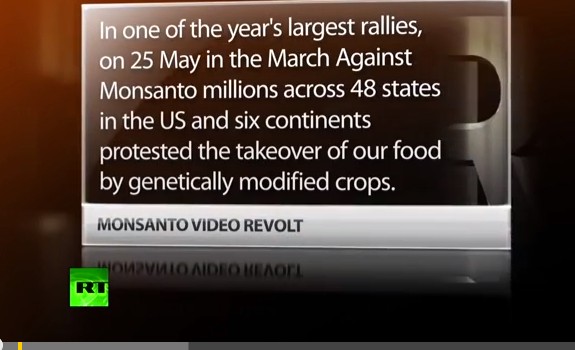 The international media has already begun covering the Monsanto Video Revolt, an online revolution against Monsanto and corruption at large that I briefly announced quite recently. Originally just an idea conceived during the March Against Monsanto, I am now teaming up with major natural health titans like Mike Adams of NaturalNews and Dr. Edward Group of Global Healing Center to blast this grassroots Monsanto Video Revolt out on July 24th of this year in a revolution against Monsanto’s corruption.

As you can see in the video above, international news juggernaut RT has launched major coverage of this event both through their news website with the headline ‘Monsanto Video Revolt: Global anti-GMO online rally launches’ as well as video coverage posted up on the RT Youtube channel — which now is the highest ranking news channel on the site with over 1 billion views. The RT television station also is stated to reach over 550 million people in 100 plus countries, the station on which I joined The Truthseeker program to discuss the Monsanto Video Revolt and other issues as well.

The bottom line? The opposition against Monsanto is being highlighted around the world in a major way, and countless activists each day are being created through the desire to reclaim the food supply. The Monsanto Video Revolt is a powerful step in achieving this goal, and I invite all of you to upload your videos against Monsanto via Youtube and all of the major video websites (including TV.NaturalNews.com where it won’t be censored).

From the RT report on the Monsanto Video Revolt:

A new initiative to bypass the corporate media blackout on GMO foods and bring the issue to world attention has been launched. Monsanto Video Revolt is to hit the net in the upcoming weeks, editor of Naturalsociety.com Anthony Gucciardi tells RT.

According to the initiative, participants are to record a video of explaining why they stand against Monsanto and GMO’s at large. Then on July 24, videos are to be uploaded to a major video website such as Vimeo or YouTube – with Monsanto Video Revolt in the title – and shared through Facebook, Twitter and other social networks.

With the Video Revolt “we’re blasting this information over the gates of the mainstream media right into the central nervous system of society as a whole,” Gucciardi said, because “media could choose to ignore – and they do every single time in the mainstream media.”