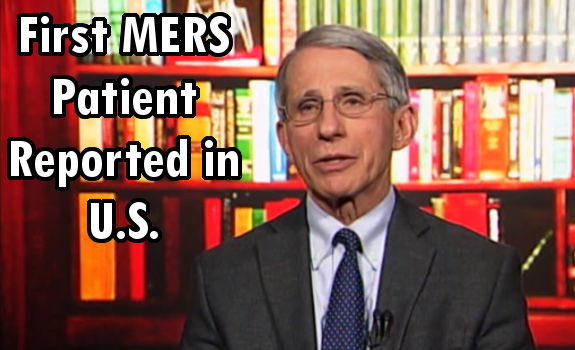 By Mike Barrett
The Middle East Respiratory Syndrome (MERS) spreading slowly throughout nations in the middle East such as Saudi Arabia has health agencies worried as the virus continues to hop around without a ‘cure’. There are now a total of 414 confirmed cases of MERS in Saudi Arabia, with 115 deaths. What’s more, the first case of deadly MERS has been confirmed in the United States.

A healthcare worker traveling from Saudi Arabia, to London, then back to the U.S. on April 24th landed in Chicago, Illinois. Three days later, he experienced the common respiratory symptoms associated with MERS, including cough, shortness of breath, and a fever. After checking in to the hospital on April 28th, samples were taken to the CDC to be tested for MERS; the organization confirmed the infection May 2nd.

Dr. Anne Schuchat, director of the CDC’s National Center for Immunization and Respiratory Diseases, said on a conference call the first U.S. case of MERS was “of great concern because of its virulence,” proving fatal in about a third of infections. She said the case represents “a very low risk to the broader general public,” though this highly contagious virus is spreading with no known treatment in sight.

On May 5th, health officials said that the patient infected with MERS may soon leave the hospital, but may still be isolated while at home. About 50 hospital employees had contact with the patient before he was placed in isolation and have been isolated at home themselves, said Alan Kumar, chief medical information officer at Community Hospital. Since the virus is thought to have a 14-day incubation period, doctors will run a second test on the family of the patient and healthcare workers who came in contact with the patient. If they still test negative for the virus, they may return to their regular lives.

The virus is characterized by fever, cough, diarrhea, shortness of breath, and can lead to pneumonia and kidney failure. It can almost seem like the flu. As the CDC reports, most people who became infected with MERS-CoV developed severe acute respiratory illness with symptoms of fever, cough, and shortness of breath. MERS currently holds about a 28% death rate.

Hopefully we’ll be able to tame this virus before it spreads uncontrollably.